This truly is huge. But what exactly can you do with it? And are you prepared to meet the changes?

1. What Does Google Mean By Expanded Text Ads?

Expanded Text Ads contain almost 50% more text than the current ads. The idea behind it is to maximize and optimize your exposure on mobile devices. The search result will be displayed with a bigger headline and a longer description.
You can of course expect the Expanded Text Ads available on all platforms and devices. Although the idea was created with mobile in mind, the idea was applied to desktop as well. This means the text in the Expanded Ads will automatically be wrapped, based on device size.

2. Why Does Google Like The New Expanded Ads Better?

It’s stunning that this is the biggest change to text ads in the 15 years AdWords has been live.
Several months ago, Google tried to imagine a new way of presenting text ads through AdWords. They were motivated to create AdWords for today’s fast-paced mobile depended world, and rightfully so. They reasonably made the decision, taken that 50% of the trillion searches per year are done via a mobile device.
The first step Google made towards universal AdWords experience across all devices was in February. That’s when they decided to remove the right side Ads on desktop. Shortly after, in Q2 of 2016, Google started Expanded Text Ads tests. The Expanded Text Ads also seem like a natural follow-up after the super-sized headlines from 2011.

3.How Big Will These Expanded Ads Be? 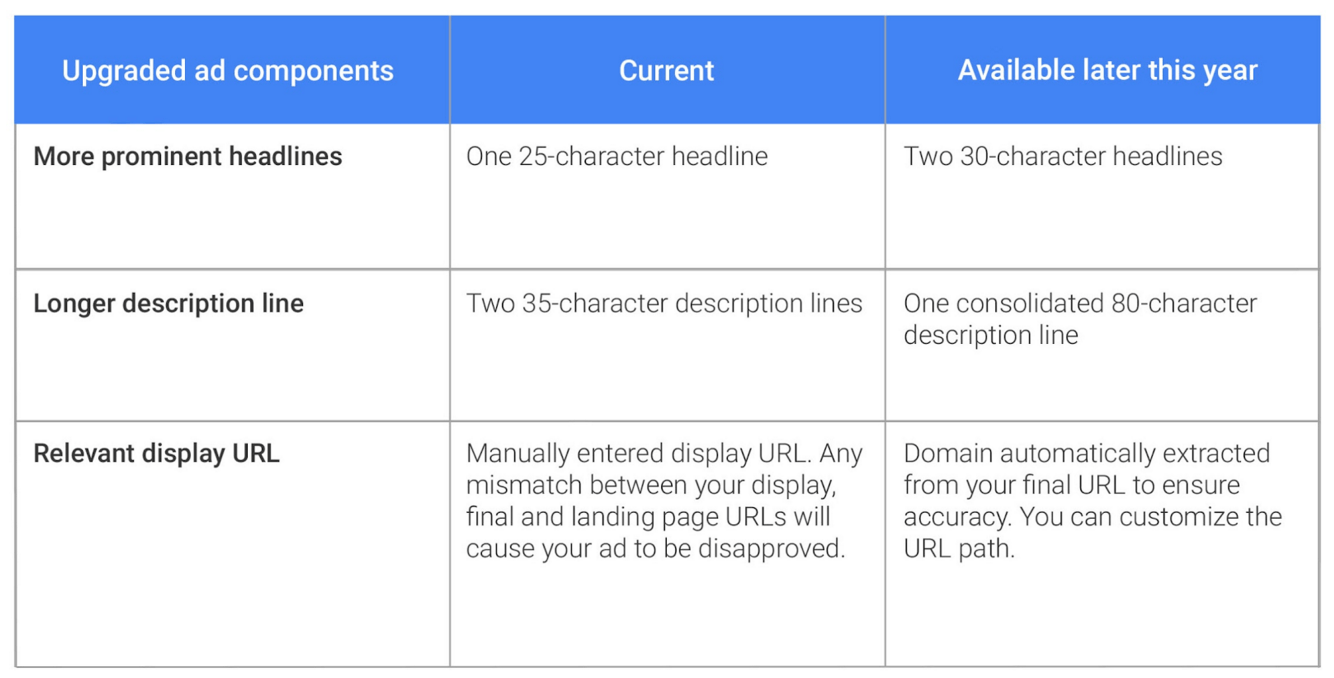 What’s interesting is how exactly these changes might affect the customer journey?

4.What Will The New Expanded Text Ads Look Like?

Very simple and easy, and at the same time effective. You get the chance to make the most out of your text ads. This picture shows what it will look like both on mobile and desktop.


And here are the changes that Expanded Text Ads brings to the AdWords interface.

5.How Much Will Headlines Expand?

Google decided to provide advertisers with two 30 character headlines, introduced with the Expanded Text Ads update coming later in 2016.
Up until that the headlines of the text ads were limited to 25 characters.

6.How Much Are Description lines Expanding?

7.How will Display URLs Change?

The domain will automatically be taken from the final URL by AdWords, and you will be able to customize the Display URL with two 15 character paths e.g. example.com/path-1/path-2. You can see the example on the picture above.

8.How Will This Improve CTR?

As said before, this is huge. Expanded Text Ads brings you more text to convey your message, which gives you greater exposure. Just the change to longer text ads brings increase in CTR by as much as 20 percent, according to early reports. Such a big number in online advertising means that there might as will be some changes in the marketing attribution modeling.

9.So, When Do We Get The Extended Ads?

They are already live so get started ASAP!

10.How do you keep up with the changes?

The most important feature you should take care of is your Quality Score. Just as mentioned before, you get more opportunity to convey the precise message you have. Although already the most important metric in AdWords, this is why it is about to become even more valuable. It happens so businesses that are on the top spots get the most valuable SERP position. Combined with the short attention span, it could make everything below the first couple of positions irrelevant on mobile devices.

“Google’s main objective is
to provide good value to
both users and advertisers.”

Google’s auction system is composed of several elements. Google’s main objective is to provide good value to both users and advertisers. That way both users will get quality results which answer to their needs, but advertisers will actually sell more, since they are in the proper market space. This is why the most important aspect of AdWords ad is the relevance. The whole idea is that all parties should benefit from using the service, so they have future interest in it. That’s why Google decided to use a special algorithm that decides how to qualify ads.

Google uses a variation of a special type of auction called “2nd price auction”. In a traditional auction the bidders compete, and the one with the highest price wins. In Google’s case the bidders don’t have to pay the full price they offer, but match the one below them (2nd highest, therefore the name). The idea is that advertisers should bid their absolute maximum willingness, but for now they have to pay just enough to beat the competition. Additionally, advertisers pay only when someone actually clicks on the link. But as we mentioned before, they use a variation of this type of auction. This means there are other factors that matter, and weather you (and your audience) get to see your Ad in the SERP is not as simple as giving “x” amount of money. Marketers trying to buy their way to the top is in fact one of the reasons why Google has adopted this quality measurement system for evaluation. This filtering method combines other elements as well, so let’s take a deeper dive in the whole process of getting a proper Ad up and running.
The first factor to consider is the expected CTR (click through rate). This is all Google’s prediction of how often your ad will be clicked when displayed. As you might expect, Google gets and uses a lot of feedback from users, in order to drive decision making. The demonstration of high CTR shows Google that users are satisfied with the result they see, because in a way they “voted” with their clicks.
The second factor is ads landing page experience. This again involves satisfaction of the result. If a landing page is relevant and helps the user, it will provide good value to them. And those channels receive a higher score. If you are trying to imagine what a good landing page looks like, consider these factors. Most importantly it has to be relevant and it has to help the user complete their task with ease. It also has to have original content, be easily navigable and be transparent about the nature of your business.
The way your site interacts with the user’s device and your intention with their personal information is again another factor involved in the process of selecting.
Another element that you might have expected is when the content of the language in the ad is compared to the search queries. It determines the ad relevance to what people are expecting to see.
The formats or enhancements to search ads are also considered. Those are features that show more extensive information about your business. They are generally things like a phone number, site links or the website’s domain and ad headline. They simply provide more information, making it reasonable for users to click on it.
All of these elements combined create the Ad Rank – the overall score that an Ad is judged by.
On the following picture you can see a visual interpretation of how the Ad Ranking works. 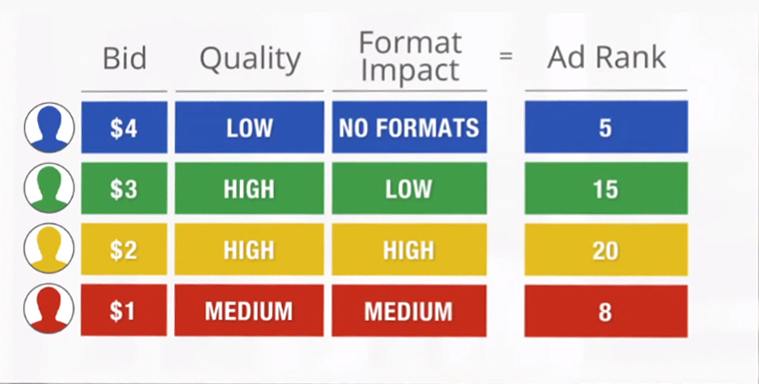 This is how thing look like when the bidding is over. You can see that the advertisers are filtered by bid, from highest to lowest. 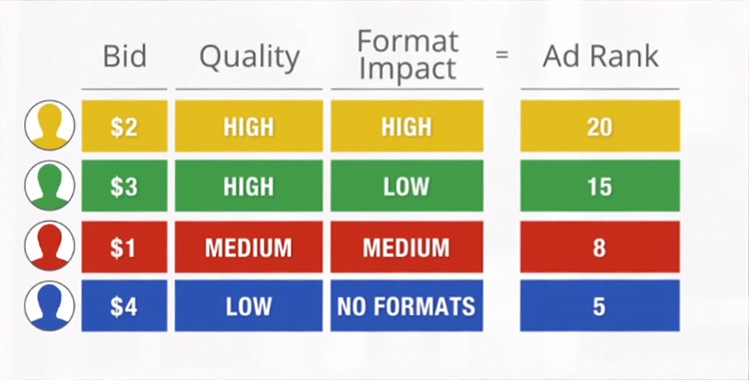 Here however, the order changes drastically. When taking into consideration the abovementioned factors, the person that was 3rd is on the first place, although their bid is not the highest. Here the bidders are sorted by Ad Rank. 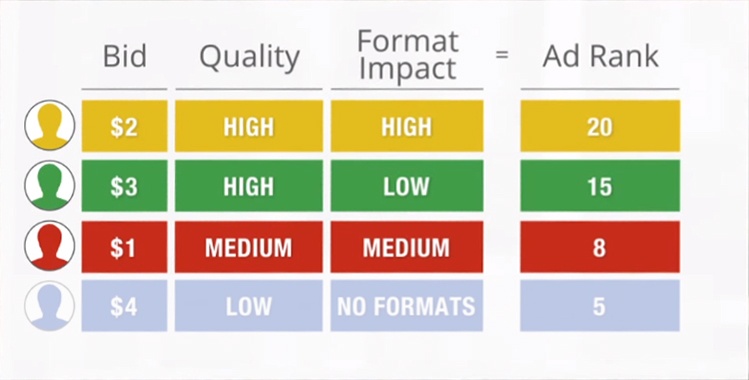 As you can see here, up until now the blue guy had the lead, in terms of bid price. However now that things have changed, he has way too low Ad Rank, and therefore doesn’t qualify for the bid. The first three competitors will be displayed on the SERP by descending order of Ad Rank as it follows.